Lynne
British Columbia, Canada
I'm a retired accountant & teacher who has set her sight on creating interesting & beautiful gardens, from the ground up! 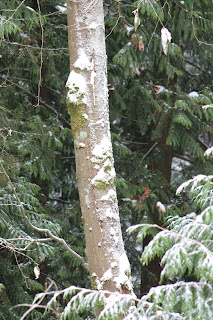 When I looked out this morning, an amazing thing was happening in the old, failing trees along the back edge of my property - fluffy chunks of new snow are climbing up the trees!

I'm not sure how this snow managed to climb so high so quickly. We only had 2 inches of snow last night.
I know...I know.. this is a pitiful amount, compared to the snows happening in Eastern Canada and the States. But let me tell you - in this area, 2 inches can stop activity dead in its tracks. Wet Coasters panic at the sight of white on the ground. Where are all those salt trucks that my taxes are paying for? Why don't I hear any snow plows running about. We are just not prepared.

And that UPS delivery guy in his shorts and boots. He's just pretending it's business as usual.

Oh well, all I can do is hibernate, until the rain comes tomorrow and clears the roads for me.


Or I can email my City maintenance guy, and complain about the roads.

As I came around the corner this afternoon. loaded with shopping
bags, I saw that that litle brown tail sticking out from under the
boxwood. I stopped , but he'd obviously seen (heard) me,
and slipped away into his space. That little brown lizard
is here to stay.

We had other  visitors to our Back 40 today, as well.
A surveyor crew were busy measuring lines and
tying bright orange tape to the bushes along the back of my lot.
And trampling through the ferns and huckleberry bushes,
complaining bitterly about the blackberries. Hehe.

There may be much noise and upset coming to our
wild, quiet space. But there's not much we can do about
this, as we don't own the lot behind us. It has been vacant
and uncared for since we built here, so I guess it's time
has come.
But they best not mess with the set backs for the creek
that runs in the ravine between the two lots, or they will
have one wildly angry senior gardener on their case!!
Posted by Lynne at 11:05 PM No comments:

This afternoon, as I was stepping out the side door of the garage,
I notice this "thing" on the edge of the sidewalk step in front of me.
It was a long, with brown and black stripes, and looked for all the
world like a dead leaf.
It was bigger than most leaves in my yard (about 6 inches), so I
stopped to look have a closer look.
The colouring suggested 'Slug' to me right away. Yuck.
So I leaned down to get a closer look, and startled the little guy.

Two little legs popped out of the side of this creature, and it
whipped around and scuttled under the boxwood.

I laughed, feeling glad that I didn't have 6 inch slugs living in my
garden, but also sad that I had interupted his sunbath on the
warm concrete. 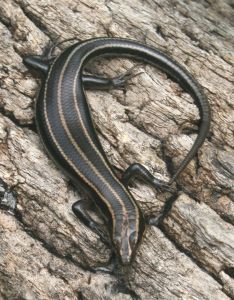 Maybe he'll come back if the sun comes out again (and if that
concrete ever warms up again).
I think he might be a skink, but I'm not sure.
Any suggestions as to his name?

That's right!
I've got flying flowers in my garden - at last!
Well, it's not really a flower, but a yellow Monarch butterfly.
I spotted it hanging around the flowers on the sage  plants two days ago.
It was out and off around the corner before I could even get close enough
to check those black stripes.
Today, I silently watch it circle around the alder branches in the back yard,
again moving so quickly that there was no time to grab my camera.
This little guy is fast!
Perhaps it's the only way to survive in this world, as there are lots of
hungry birds out back.
Tomorrow, I'll build a Butterfly Feeding Station, with water and bits
of fruit. Maybe that will slow him (or her) down long enough for a picture.
One can hope.
Posted by Lynne at 11:37 PM 4 comments:

Where Are All The Flowers??

My vertical garden is growing nicely - lots of stems and leaves, but no flowers.
It has been a cool, wet spring but there's not even a bud on those vines.
I was hoping that this Silver Lace Vine would be up to the challenge of
this semi-shady area, so I think I'll have to wait for a bit longer. 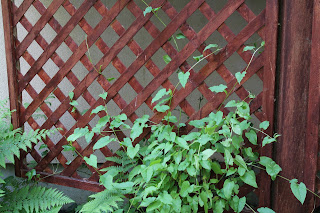 And pray for some sunshine!
Posted by Lynne at 11:16 PM No comments: 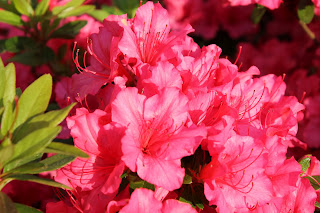 It's been such a long, cold Spring that I thought my shrubs would never bloom. But they did, finally, just this last week. And here it's almost June! This azalea (it's a group of three) lives in my front yard, is supremely trouble free, and creates a giant hit of brightness in the Spring that last a full two weeks.
The best kind of tenant.

There's a different  rhododendron just down  the drive from the pink beauty that all the bees love. 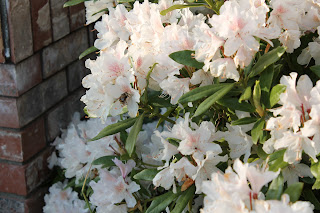 This plant blooms just before the pink azalea, but the blooms last a bit longer.
When I was trying to photograph a bee in one of the flowers, I realized that my finger is much slower that those tiny wings
The bees didn't seem upset that I was following them, but they weren't waiting around either. You can just see the rear of that bumblebee. Not his greatest picture  but it's good to see them whizzing around the blooms. Each year there are fewer bees, though I see at least 4  or 5 different types each day.
The plants in the Back 40 are mainly shrubs, ferns and trees, the kinds that enjoy the shade and extra shady part of my garden. 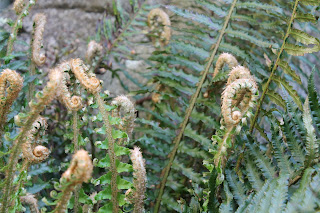 Most of the sword ferns have moved in on their own (with help from the birds?) and I enjoy there grace and persistence. The growing conditions are very challenging back here, as the soil consists mainly of leaves and some bark mulch that has composted itself laid on top of sandy gravel. When this sub-division was developed, the standard was to scrape the land clean, remove the trees (they were felled and burned) and truck away any top soil before laying down that cement sidewalk and paved street. It is quite amazing to watch how Mother Nature has rebuilt the garden, with not much help from myself or my Assistant Gardener, other that a bit of bark mulch and weed pulling.
Spring shoots on these swords look like aliens and the new green fronds stand strong. These guys even look good through the snows in winter, and the best thing about these swords - Nobody eats them! They're deer proof, bird proof, squirrel proof and the even the bugs and slugs leave them be!
My kind of plant.

It's been a long while since I posted on my site, and now it is TIME TO GET BACK TO WORK.
Don't mind me, I'm just yelling at myself for being away for so long.

May has brought sunshine, lot's of leaves, a few flowers and now cold nights (around 4 C) to the
Back 40. The perennials are perking up, but slowly.
This is another cold Spring, but also a dry one.


A few of the regulars are madly going to town: the Dicentra, the ferns, and of course, the
Lamium. About 10 days ago, I went out to push it back a bit, and discovered that not only had
it moved right into my Hedgerow, it has sneaked across the dry creek.
Along the lot line, those tough little plants were almost knee high, and they're climbing the
back of my neighbour's garden shed.
I spent 2 afternoons tearing out lamium from amongst the hedgerow shrubs (two giant bags full)
and realized that I hardly made a dent in it. This is going to be a real war!
Coquitlam has banned the use of "ornamental herbicides" in our home gardens.
Perhaps I need a goat.